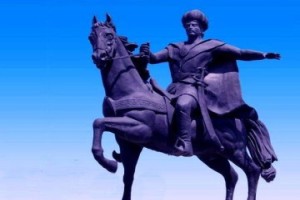 The period of III-XVIII centuries covers the history of the Middle Ages of Azerbaijan. During this period, significant changes have occurred in the religious, cultural life, in the practice of statehood of Azerbaijan. The Turkish language has become an important means of communication, the ethnic minorities have begun to use it as a means of communication between them. Some of the Turks believed in God, but the majority had faith in the fire-worship.

Albanian state, which was the subject of Sassanid state partly during certain periods but which was pursuing its own independent policy existed in the seventh century. To protect important facilities of the country from enemies in Albania in the coast of the river Alazan Torpaggala was built, in Agdam Govurgala, Javanshir castle in Ismayilli region were built.

The south Lands of Azerbaijan and the north of the Islamic Republic of Iran became completely part of the Sassanid state. During this period, though the religion of Zoroastrianism existed in the territory of Azerbaijan, Christianity began to spread from the fourth century. As an example Ateshgah in Baku can be mentioned among the monuments of that period. The word Ateshgah means a place for people who worship the fire”. Azerbaijani Turkish people began to form as a nation in the modern territories of Azerbaijan cover these periods. Our people began to form the basis of Oguz group of Turks. With the start of the Arab conquests in the first half of the seventh century, the territory of Azerbaijan was incorporated into the Arab Caliphate. Our people accepted religion of Islam. State of Shirvan was founded in 861 and played an important role in the life of near, Middle East and Azerbaijan till 1538. During the march toward western lands and the Ottoman Empire by Tamerlan, State of Shirvan was allied with him. Beside, Azerbaijan’s territories has fallen under the influence of Seljuk Turks in the second half of the eleventh century, but after the weakening of the Seljuk Turks, Azerbaijan Atabeys state was established in the western and southern areas of the state of Azerbaijan. At various times, the capital of that state, was Ganja, Tabriz and Nakhchivan. The area of this country covered the north territories of the Republic of Iraq. With the arrival of Seljuks to Azerbaijan territory, the formation process of modern Azerbaijani people is completed.

Among the historical monuments of that period can be mentioned as example Baku, Shirvanshahlar Palace, Maiden Tower, Mardakan fortresses, Khudaferin Bridge and others. The period after 1501 years of Azerbaijan history is closely linked to the establishment, development and decline of Azerbaijani Safavid state. Azerbaijani Safavid state has special role in the formation of the territory of modern Azerbaijan Republic. The territory controlled by Safavi in the east to the borders of Afghanistan, in the west Turkey and in the south to Iran Gulf, the North Caucasian stretched. Azerbaijani language was the official language of the Safavids. Among the architectural monuments of this period can be mentioned as example the mausoleum of Sheikh Junaid was built in Hazra village of Gusar region in 1544, and Baku’s East gates.

Besides, as an example can be taken Ateshgah in Baku embodying the fire worship of Azerbaijanis before Islam and built by the Indian travelers. After the collapse period of Safavis state, the northern and southern territories of Azerbaijan were divided into independent khans.