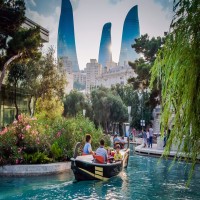 So if you are searching place for travel in the world, then Azerbaijan is the best offer. You have chance to learn little information as guide about Azerbaijan in our website. You can learn the regional tourist centres of Azerbaijan as Guba, Gusar, Ismayilli, Lankaran, Masally, Gabala, Khachmaz, Sheki and Ganja. All information about these regions written in the tours section of our website. These centers introduce visitors of our website to the cultural and historical heritage of regions. As well as talking about the beauty of their lakes, waterfalls, forests and mountains.

Seven tourist routes in the regions to accelerate tourism development in Azerbaijan, bring domestic tourism potential to the world market. As well as attract foreign tourists to our marvelous corners. Of these, 4 are main and 3 are additional routes. So the main tourist routes are Baku-Khachmaz, Baku-Balakan, Baku-Astara and Baku-Gazakh. In additional routes are Baku-Absheron peninsula, Baku-Nagorno-Karabakh and Baku-Nakhchivan.

As a result of the potential of domestic tourism in Azerbaijan is primarily due to the favorable natural and geographical location of the regions, rich flora and fauna, and beautiful nature. At the same time, in recent years, the construction of modern recreation centers, hotels, and the creation of road and transport infrastructure in different regions has increased. The interest of both foreign and local tourists in our regions.

Azerbaijan as a tourism destination Beach tourism in Khachmaz

Khachmaz is one of the regions of Azerbaijan known for its tourism opportunities and where thousands of people visit it every year. This region is very attractive for tourists in terms of its high mountains, forests along the Caspian Sea, its rich nature, its unique cuisine and traditions.

Agriculture and tourism are also the main sources of income for the region’s population. Throughout the Nabran-Yalama-Khudat route, fresh fruits and vegetables can be found throughout the year. So the region is also known for home-made medicinal juices and drinks. The great German traveler Adam Oleari, while writing about his visit to Azerbaijan. Especially he noted from 1636 to 1638, especially mentioned the various fruit juices he drank in Khachmaz.

The natural and geographical position of Khachmaz region has made it one of the most popular tourism destinations in Azerbaijan. Most beach tourism is developed here. When you hear the name of Nabran, not too far from the center of the district, the seas and beaches come first. Since the 1960s, trade unions of various government agencies have begun to build holiday homes for their employees here. Now the village of Nabran is known for its beautiful nature, along with the hospitable people, with high quality tourism facilities.

Tel village is 6 km from Nabran. The territory of this village is a true find for hunting lovers. There is a mud volcano just a few miles from the village. Residents say the volcano mud is a cure for various skin diseases.
According to Nazim Agayev, head of the Khachmaz District Culture and Tourism Department, there are 40 tourist accommodation facilities, including 1 three-star and three-star hotels, which can accommodate up to 1,600 people at the same time. In 2009 about 18,000 tourists visited the area. Because they prefer entertainment and therapeutic tourism.

Gabala is famous for its ancient monuments and modern recreation centers

So Gabala is in the north-west of Azerbaijan, in the Sheki-Zagatala economic zone, on the border with Dagestan and Georgia. The district is famous for its walnut, hazelnut and chestnut gardens. The median age of each tree in the famous slopes forests on the mountain slopes, 1000m above sea level, is over 500 years. Some of these trees are in the list of state protection natural monuments. One of the mountaineering routes to the highest peak of the country – Bazarduzu Mountain (4466 m above sea level) passes through this area.

There are many ancient historical, cultural and architectural monuments in the area. Alban Temple in Amirli village (4th century), Haji Garib Mosque in Nij village and Chotari Albanian church, Sheikh Badraddin and Sheikh Mansur tombs in Hazra village (XV century), tomb in Shafili village (XVII century), It provides an important precondition for the development of cultural tourism in Gabala.

Azerbaijan as a tourism destination the region has a tourist infrastructure that meets international standards for the accommodation of tourists. In recent years new tourist complexes, recreation centers meeting the highest international standards are available in the district. So this will increase the interest of both foreign and local tourists to Gabala. The number of people who want to spend their holidays in Gabala and get to know the district is growing year by year. Tourists visit this beautiful place to get in touch with the exotic nature of Gabala, enjoy the delectable local cuisine, and with various cultural patterns.