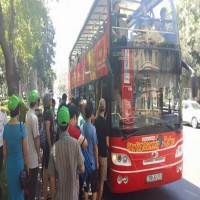 According to statistics from the World Tourism Organization, with the exception of 2009, the number of international tourist arrivals has been increasing year by year.

Although the country has progress in improves its infrastructure by taking a number of steps towards developing the tourism potential in recent years, putting a heavy emphasis on the development of the non-oil sector, the list is still long enough to justify our ambitions. There is a great potential for the creation of many types of tourism in the country and favorable conditions for their development are created.

So Azerbaijan’s geographically favorable location, great government support and infrastructure improvement are all factors contributing to the development of tourism. The announcement of 2011 as the Year of Tourism was an important step in the development of this sector and implementation of new projects. Azerbaijan is famous for its diversity of tourism. Examples of such types of tourism are business tourism, leisure tourism, health tourism, and sports tourism.

Because Azerbaijan as a tourist destination, the influx of tourists is increasing year by year, with high quality hotels in the capital and other tourist areas. Their number has already exceeded 500. One of the most popular brand hotels in the city Four Seasons Hotel Baku, Hyatt Regency, JW Marriott Absheron Baku Hotel, Jumeirah Bilgah Beach Hotel, Grand Hotel Europe, Hilton Baku, Kempinski Hotel Badamdar and more.

There are also hotels, recreation areas, entertainment and sports centers in the regions of Azerbaijan.

Examples include the network of hotels in the Caucasus, Gabaland amusement park in Gabala, the magnificent “Shahdag” winter and summer tourism complex in Gusar district, more than 15 Olympic sports complexes with the proper infrastructure for both sports and tourists.

Azerbaijan, with sufficient tourism potential, is able to compete with the leading countries of the world in this area and demonstrate its potential.

So, the organization of tourism exhibitions in Azerbaijan, which has already become a venue for international events, is an indication of interest in this area. Such exhibitions also provide a good opportunity to showcase the tourism potential of our country. Azerbaijan International Tourism and Travel Exhibition was first in 2002.

The AITF 2013 12th International Tourism and Travel Exhibition was this year. Organization of the exhibition is a significant event in the tourism market. As well as attracts many participants and visitors from different countries of the world every year.

Improvement of infrastructure is also one of the measures taken to increase the competitiveness of tourism in Azerbaijan.